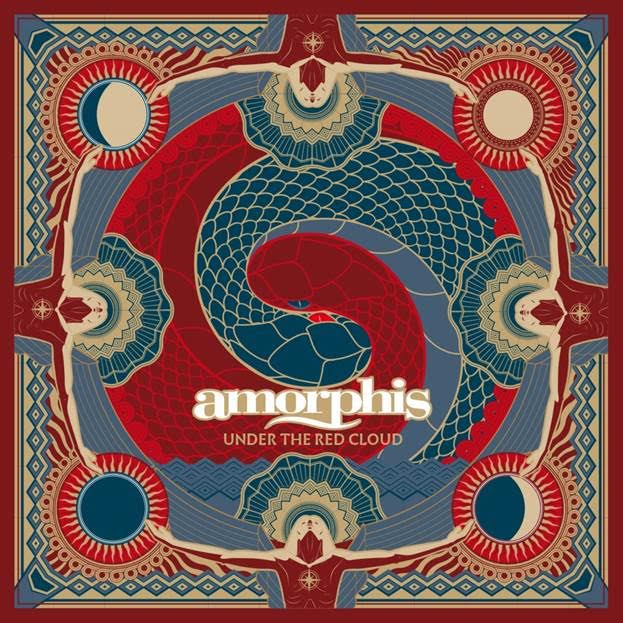 How has the tour been going?

So far good. It’s ending, tomorrow is the last show. We’ve been traveling about 6,5 weeks in Europe. It’s been really nice and probably one of the easiest tours we’ve ever had. Support bands are really nice, Textures and Poem, everybody gets along, that’s important as well.

End of last year you’ve been touring with Nightwish and Arch Enemy in big venues. How was that for you?

It was a pretty amazing tour, I guess we got quite a lot of new fans as well. At least we know that of this tour, in a lot of venues it probably has brought a lot of new people who heard us there for the first time.

Even though the music is not really the same?

It’s not the same, but it’s not that far away either. There was Arch Enemy, Nightwish and us and every band is very different from each other, but still there is some common link.

Amorphis has gone through a real evolution throughout the years, going from death and doom metal to a more melodic and progressive sound. How did this change take place?

We started influenced by early death metal, listening to Morbid Angel, Carcass, Entombed. We recorded our first album also in Sunlight Studios, it was very famous by a lot of Swedish bands at that time. But still on our first album, we had some rough melody ideas, because we listened to a lot of different music as well. I remember when we recorded the first album in Sweden, we had a lot of 70’s prog albums from Finland with us that we listened to. Those Finish bands used a lot of folk elements. I guess from there we started to add some folk flavors into our music as well. And the second album ‘Tales from the Thousand Lakes’ was already awfully different in a way that we started to search our own sound and that’s actually the success of that album. It came as a big surprise to us because we didn’t expect anything, it was a weird album. Even the producer Tomas Skogsberg was worried about that, it was so different. But it got great critics and that album really opened a lot of doors to us. In ‘Elegy’, the next album, we brought even more folk elements in there and changed the music to much more melodic and took another singer into the band which also could use clean vocals. During the years there have been more experimental albums. We wanted to try different things to see what pleased us.

Since Tomi (singer) joined the band, we started to take a backward step because he’s a big fan of our early albums. I guess we started to take more influences from our early stuff again, haha. And even now we try to find some little new elements or things to use in our music, to keep it more interesting.

Your latest album ‘Under the Red Cloud’ receives what seems to be the best scores and critics ever, even 2nd place in Finland Charts. How do you reflect on it by now?

We knew that it would turn out well. It’s the first album where we used the Swedish producer Jens Borgren and we sent our demos to him. He came to Finland with the preproduction of the new songs. We knew that he was going to take this to another level and we gave him like free hands to arrange the music as he wanted, to make the sound well. He wanted us to do an album that includes a lot of elements that he likes about Amorphis. He also likes a lot of the old work that we have done, so in some parts, especially with the vocal arrangements, the sound became much more aggressive. There’s even some little black metal hints in some of the songs.

It was a very intensive session. We recorded the album in his studio and it took quite a lot of time, all together two months almost and he’s really picky on everything, especially the guitar takes. But it was worth it, we tried a lot of different songs and really didn’t hurry at all, making the album solid. At some point you realize it’s different, it’s going to be one step further for us, the musicians. ‘Circle’, the previous album, we did with Peter Tägtgren, that was also a very nice session, but I think this was a bit more intense than then. You know when you are finished with a good album, but you never know how critics will like it (laughs). It’s always excited to wait for the feedback from critics and to see where it goes from there.

Some years ago ‘Circle’ sold gold in Finland and it got an ‘album of the year’ award. Is it comparable for ‘Under the Red Cloud’?

I guess so, it’s pretty close to a gold album in Finland at the moment. About awards, I don’t know yet, if there are going to be any (laughs). We’ll see, it’s hard to tell.

I’m going to be honest with you. As a reporter, I get every album of the biggest labels out there to listen to and every year we are making with all the crew a personal top 10 list and I really must say that ‘Under the Red Cloud’ is not only my biggest surprise but also my number 1. So congratulations on that!

How do you make an album that from the first to the last song sounds incredible? Is it the recording process, the inspiration, …?

I think it’s all that. It’s the final touch when you decide what you do with the album, what songs you leave on and leave away, … That’s always the toughest one because all members have opinions and we try to be very democratic with all decisions. So we said to Jens (producer): “Now it’s up to you to choose the songs”. For a very long time this was difficult, all the songs that we recorded were good ones, so I couldn’t have picked out any of the songs.

So you have much more songs than there are on the album?

Yes, there is the digipak bonus track, the bonus track for vinyl, you have the bonus tracks for Japan, … But I’m very happy about the result. It’s very compact and every song really deserves its place on the album. That’s what we really wanted, not just a collection of songs, but really make a whole album where not only the music but also the lyrics and the artwork have to match.

There is one song, Tree of Ages, which sounds so happy and different from the rest. How did it end up on the album?

Haha. I don’t know, we should ask Jens, he picked the songs but yeah, you’re right, perhaps it’s too happy (laughs). It’s got a nice folk touch though.

With what band would you compare Amorphis? Any from Finland perhaps? What are or were your influences?

Hmm… Our influences our mostly from the same albums that we used to listen to. In the tour bus, if we start to listen to some music it’s always some old Deep Purple, Iron Maiden… Santeri, our keyboard player, likes the 80’s, disco music. Then everybody goes to sleep when it starts to play (laughs). No, we listen quite a lot of old classics. I guess in some way all that music inspires us. But I also really love Katatonia, Riverside, Opeth of course, Porcupine Tree… All these bands have some sort of elements that sort of have something that we could do for Amorphis as well. I speak on my behalf, but if I start to write music, I really try to clear my head of everything. I don’t listen to other music or our music. It’s to sort of make my mind blank and start with a clean slate.

Being active since the beginning of the 90’s, how do you look back on the music scene? Has it become easier or harder to realize something in this business?

Both actually. It's easier now because of the technology. You can buy now all the studio equipment that you want and put it in your own house. Before, everything had to be done in a recording studio.

Also the communication. When we started out, we were with an American record label, Relapse Records. It was difficult to get into contact with them compared to now. I remember that my parents bought me a fax machine and that's how we stayed in touch (laughs)! Or sending letters, but that took time. Or telephone, but that cost a lot. Now we have e-mail and it's as simple as that. Also for sending music. In the past we had to record all songs in the recording studio on cassette, then copy that cassette and send it out, it's such a big difference.

But it's also hard now especially for beginning bands. Record companies want everything, rights on the music, the artwork, the touring. They have booking companies, distribution companies, ... Bands have to give all that up now. For some it could work, for others it doesn't. If I would start a new band now, I think I would try to do everything myself and only search someone for distribution. 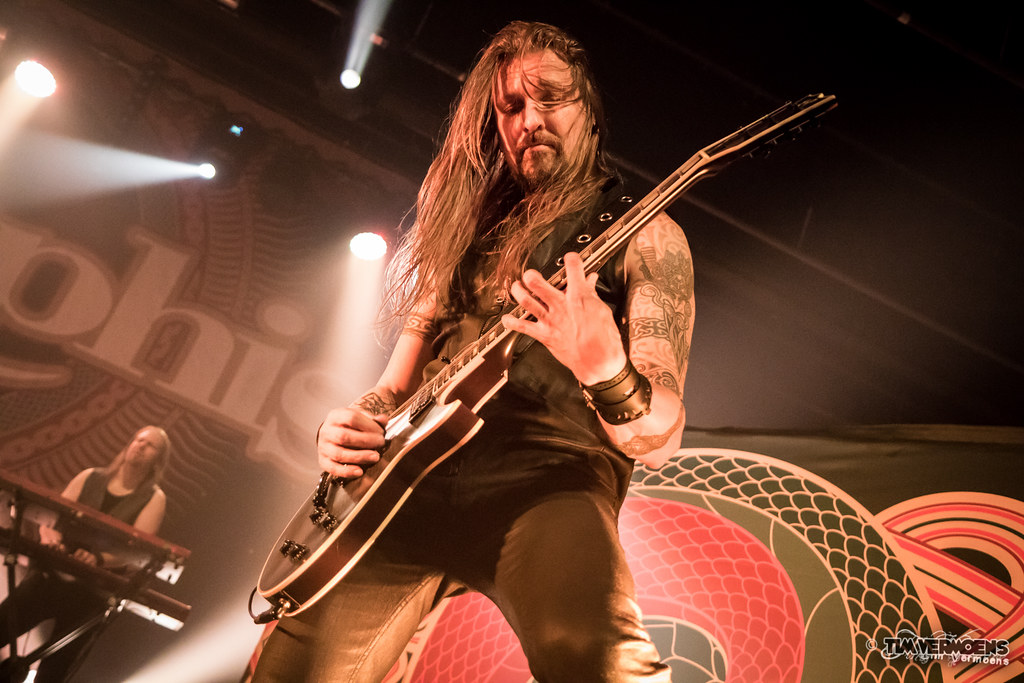 Being a Finnish band, how would you compare the success you have in your own country to the success in the rest of Europe and overseas?

In Finland we are doing very good, we get quite some airplay on the radio. It's not the same in Sweden for example. In Sweden, Norway, Denmark, they play less metal on the radio, I guess that something only in Finland. In Germany we are doing well as well, they like us there. We played a lot there. Same thing in the UK. We played 5 shows there this tour, which was quite nice. And here in Belgium we played a lot as well, Biebob, now here, Graspop... We don't play there this year but hopefully 2017. What else is there, Russia, Japan, also good. The only difficult market is North-America. It's hard for a band to get through there. We haven't played there in a long time but hope to do so soon again. It's just very difficult and it costs a lot, even only to get there.

Is this concert in Trix instead of Biebob maybe thanks to the success of the recent Nightwish tour?

I don't know really. It could be. Or maybe it's the success of the new album, it's hard to say. I ask around with people, but even then it's hard to tell. In Bulgaria for example, they had to double the capacity, so I asked the promotor why, but he could not give a reason. But yes, it could really be due to that.

Do you have some last words for our readers and your Belgian fans?

Yes I do! Greetings, keep listening to metal, to Amorphis and come rock with us at our shows! Thanks for supporting us, take care! 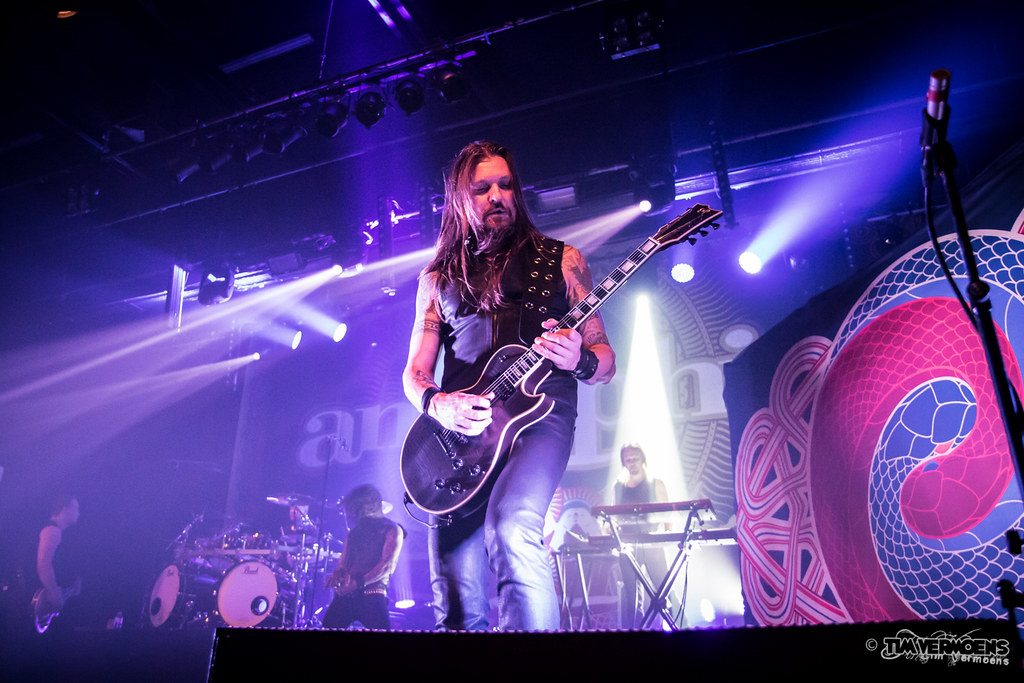