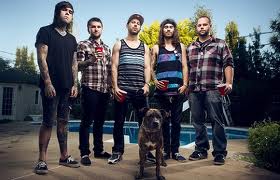 First of all, I wanna thank you for having this interview with Festivalblog. It is really a great honor to interview a band like yours.

Thanks! No problem at all. (laughs)

How was the show on Groezrock today?

Amazing! Last time I was here was four or five years ago with Despised Icon. I’m very fortunate to have the opportunity to play on Groezrock once again. I loved it because there are punkrockbands, metalbands, hardcore and metalcorebands. I support all scenes. Our set was great! So many stagedives and more stagedives (laughs) and circlepits. It was the oldschool shit, you know? Even it is a festival setting, all was wide and low, so that people could jump on stage and just like I said, to do stagedives (laughs). There were like 500 or something! Maybe I am exaggerating a little, but there were a lot! (smiles) It was fun!

Well, how did Obey The Brave started?

We started in 2011. I used to be in Despised Icon and there were others who used to be in Blind Witness and other bands. We all grew up in Montreal-Ottawa. We all knew each other from playing shows together. We still wanted to play music. We just teamed up and started a band, shotted a video and then we were like an all star band. In January 2012 things really started to pick up fast. We had all these shows and touroffers. All of the sudden we were talking to a bunch of labels and here we are a year later, it’s unreal!

Yes, this is our second European tour already. We’ve toured in 20 countries so far.

Yeah, it’s overwhelming but we all work hard, we are working everyday and we had very little time at home so we are looking to take most of the summer off to write, possibly record and we see how it goes. (smiles)

You were compared to bands like Parkway Drive, Emmure and Terror. How does this feel for Obey The Brave?

Ooooooh.. I mean, we just toured all of Northern America with Emmure and now in Europe. We are friends! We toured back in the day with them with my old band. A lot of these bands where I find myself on the road now, I’ve toured with them in the past and it’s just like a big reunion. It’s just a bunch of friends hanging out! This tour is great for us, I mean we are already seeing improvement and I’m happy! (smiles)

How was the Impericon Never Say Die tour in 2012?

It was awesome! It was my third time doing that tour, but it was the first time with Obey The Brave. Coming back to Europe after a two year break, not playing music. Being at home, trying something different, doing the office life, having a marketing job and everything, but that didn’t feel comfortable... I just wasn’t ready for it. So I quit and put everything on the line just because I missed all of this so much. It was a gamble, started from scratch with a new band, but I did it!

Where did you get the inspiration for this music and the lyrics?

Just going through a lot of personal shit, overcoming obstacles and just keeping a positive mindset to overcome everything, achieve your goals. I am so passionate about the things that I do, so when things get in the way, the rain will pour. You know? Take one step at a time, embrace myself and I will do anything that I can to ultimately be happy. So that is the lyrical content for the most part.

Well, you said it yourself. You played in Despised Icon and other bandmembers in Blind Witness. Do you feel the pressure of fans or from yourself to keep it high like you and the others did in their last bands?

Nah. I don’t care. I am extremely happy to see so many people that supported our previous bands. We come from a more death metalcore background and some people that were following us are unhappy and others are openminded enough to check out our band even though we don’t have double bass-drums (smiles). We have that too, but not as fast as we used to have (laughs). But this is us trying new things and the most people were very supportive and some people enjoy this band even more than our previous bands. And some people don’t like it at all. But I’m not here to make friends, I’m here to create music, to tour and to have a good time.

Don’t you miss the times with Despised Icon?

I miss it, I mean, It’s different. Automatically I’m playing music for myself, to be happy in life, but I do remember a time with Despised Icon where we were playing huge festivals with 10.000 people. And you know, even if I’m not doing it for the money, I’m sick of being broke. I’ve made so much money with Despised Icon, it was just unreal. But what I said, my main reason is just to play music with my friends. That’s really what’s important. In Despised Icon I’ve lost track of it at some point. I forgot how lucky and fortunate I was to be giving the opportunity to be a musician and be on all of these tours like Groezrock and all of that. Spending all this time at home, I was like ‘Fuck man, wow, that’s the life’... (thinking). That’s why I am here, that's why you and I are talking right now.

Great answer. what are the influences that you use in the music and lyrics?

Musically, we come from the metalscene. Personally for me more like Pantera, Sepultura and some of my bandmembers would like to say Metallica or whatever. I love death metal like Suffocation, Dying Fetus, Nile, Aborted and then I love hardcore like Madball, Biohazard, Bane, Trapped Under Ice. But I also love punkrock like Pennywise, NOFX, Rancid, older Millencolin. There are too many to name. I’m just a big music fan. We all took elements from here and there, mostly in the punkrock and metalcore genre. We did then something on our own!

What does hardcore mean for Obey The Brave?

I consider us more like a metalcoreband, but I don’t know. What does hardcore mean nowadays? I used to go out to hardcoreshows in the mid 90’s and it’s like H2O said it: ‘Passion before fashion’. Now I just go to hardcoreshows and all of these fucking kids, they are like 18 years old, they think that they are true and stuff and having tattoos just for fun. That’s not hardcore. I’m not trying to hate, but know what your roots are! If you wanna be hardcore, know where all the shit comes from and I think some people lost the side of that. I’m not trying to talk shit about anyone but ultimately it is what it is, that’s what I think.

What’s the best memory you’ve had since you’re playing in Obey The Brave?

Today is gonna be one of them for this band, that’s for sure. Impericon festival also as well, over 5000 people is unreal. Having good times on this tour. This summer we are doing a couple of festivals in Canada like Rockfest, but there are too many to name. Just riding the wave! (smiles)

How is the friendship between Obey The Brave and the bands that you are now on tour with (Emmure, Chelsea Grin, Attila, Buried In Verona)?

We sharing a bus with Chelsea Grin and Emmure. All great dudes! I mean there are ego's here and there (smiles), but you know... Shit happens! But for the most part, we are excited to be here.

Can you describe Obey The Brave in 3 unique words?

Except Obey The Brave then?

(thinking) In your face.

Okay (laughs). Are you gonna play in Belgium once again in 2013 or further?

Aaaah. We are already looking into coming back either in November, if not beginning of next year. We are working on something right now!

Is there a new album coming up?

Yeah, we are taking the most of the summer off to write and to do some of the Canadian festivals I was talking about. And soon as August hits we’re doing a US, Japan, Australia and Canada tour. Too keep them busy! (laughs) But we are gonna be back, that’s for sure.

Maybe this is a personal question, but here I go. You have tattoos all over your body?

I am 32 years old. I’ve had my first tattoo for my birthday. For me, I don’t like it too flashy. You won’t ever see my tattoos. I’ve got one yesterday exactly and so I have two now. They were made by this artist Uncle Allen. He is neo-traditional artist, had a lot of respect for his work. I don’t plan of getting covered or anything. I don’t plan for posting any pictures on the web or something like that.

What’s the most meaningful tattoo for you?

I have two and one of them is a deer in a rose. The rose is because I really enjoy nature. Deer because I am a vegetarian, I try to be as cruelty-free as possible. I’ll try to be very respectful of animals and a deer is a big symbol in Canadian countries. The other one that I’ve got is a tomahawk, for me it’s a symbol of courage and bravery and that’s why I got it.

My last question for you is: What are the plans for Obey The Brave in the future?

Thank you for having this interview with Festivalblog.

Thank you. I appreciate it!