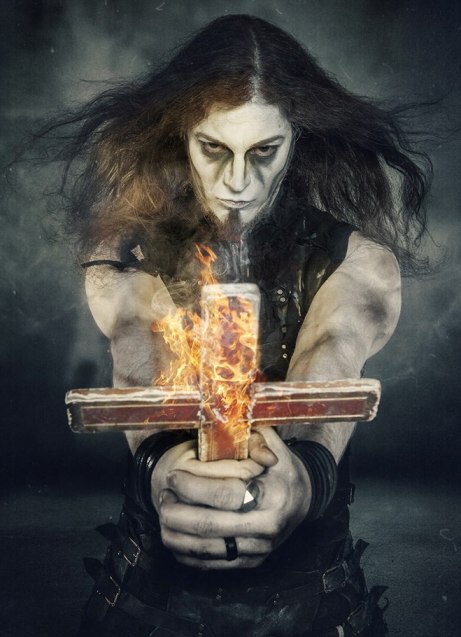 Where did the inspiration for 'Blessed & Possessed' came from?

I may sound weird, but basically we’ve been inspired by ourselves which just means that when starting to write songs, we need our very unique atmosphere we have as a band. This time I have to be honest, it was not easy to find that atmosphere. The previous album ‘Preachers of the Night’ was by far our most successful one we did to date and the structure around the band has grown and it was kind of hard to find back to being nothing but a bunch of friends writing songs together. But you have to achieve that before starting to write an album. We just have to switch off all thoughts about commercial success, about expectations, about anything and just get back to being a bunch of friends who have fun writing great heavy metal songs together. That was basically the inspiration we needed.

And the album title, who actually came up with that?

So seen from this point of view you could see the album title as describing what Powerwolf is. Blessed standing for all the epic elements in our sound, the way we act on stage, the whole imaginary of Powerwolf and possessed stands for the wild side, the heavy metal, for breaking out of morals and rules, just what a good heavy metal show should be like.

Hearing that, it sounds like it would also be a very good live album?

Yes, definitely. It’s not that far from it because when we write songs, we always have the live situation in mind. We have one test that we do when we finish the song during the songwriting. The test is that we always ask ourselves if we would really play this song live. When we say yes, then it’s a song that’s good enough to be on the album because in the end, playing live is what’s most important to us. I think that in rock and heavy metal, playing live is just the basic, most important thing.

Why is the release of the new album a bit delayed?

I can’t even tell you. I only know that there was some problem with the manufacturing of the new album. So when they were manufacturing it, they told the record company that they couldn’t guarantee to deliver the album to stores on July 10, so it was decided to postpone it with one week to prevent having disappointed fans standing in record stores on July the 10th and not finding the album. Which reason it exactly was I can’t tell you, it’s something with manufacturing. But not related to the band in any way.

Artwork is also very important, can you tell us something about it?

I’m doing all the artwork for Powerwolf as well as the merchandise, the stageprops, … Besides being a guitarist in Powerwolf, I also was working as a graphic designer and so it was an obvious choice that I would be the band in-house graphic designer. To me this is a big artistic freedom because when I write songs, I always have some pictures or call it movie scenes in mind. Often the process is when we are writing songs, I’m always scribbling some artwork ideas.

For me it belongs to the whole process of the production of an album. After the album is recorded, I start working on the layout and the artwork. This enables us to be able to do all of it on our very own, we don’t have to compromise. The usual thing is that the record company, the management and everybody listens to the album for the first time and sees the artwork when everything is finished.

Well, I know which song you mean, haha. Some people already told us that Army of the Night reminds them of Sabaton. We didn’t even realize that. We know each other quite well and I know that we probably have the same musical heroes as Sabaton, so both of the bands don’t try to reinvent heavy metal. It just like, both bands play a heavy metal style that is very catchy, very dynamic for live situations. That’s the similarities, apart of that I think the way Sabaton writes songs is different from our way of writing. But in the end it’s like if somebody says it reminds them of it, I can understand them because we are pretty obviously closer to Sabaton than to Slayer.

But to finish my answer, it’s not like we have been consciously influenced by Sabaton. As a matter of fact, I think it’s 2 albums ago, a Swedish journalist told me he thought we sound similar to Sabaton and this comment made me buy a Sabaton album because I didn’t know the band before.

You already made 2 videos for the new album, one lyric video and one video clip. Are there more to come?

No. Or yes, maybe there is still one lyric video to come but there will not be a second actual video coming. It’s only Army of the Night that we did and that’s it.

Why did you pick out those 2 specific songs for videos?

I can’t even tell you, it’s probably those songs that everybody likes most and thought I’m find with it. Picking out songs is always a hard decision, the problem is that we have a lot of catchy songs. When the record company listened to the new album, they told us “we got 1 problem, we got like 10 potential singles”, haha. It’s a nice problem to have but it’s very hard to pick a song.

In the end, we picked Army of the Night, because we remember that this was one of the songs which really blew us away during the songwriting. I remember the first time when we played the song in the rehearsal room and everybody was like, wauw we really have to play this song live. We definitely will play it live and that was one of the strongest arguments for picking Army of the Night for the video. The same goes for Armata Strigoi, both of the songs are probably very good live songs.

Power metal and also Powerwolf is very popular in Europe but less in the USA, do you have an explanation for that perhaps?

Well one obvious explanation is that we have never gone there so far. I always tell people that if you really want to understand Powerwolf, you have to see the band at least once. Then you know what Powerwolf is about. We have not come to the US yet, we will maybe go there very soon, but so far we didn’t so that one of the obvious reasons. Another reason is that it’s obvious that melodic and power metal is much bigger in Europe than in the US, maybe due to the way the scene behaves, I don’t know. I’ve never been there so I can’t judge the scene in the US.

On stage you guys seem to become another person. Which qualities of your stage-self would you also like to have in daily real life?

Well, I wouldn’t separate it that far. I mean, it’s obvious that we behave differently on stage but I always tell people that the way I behave on stage and the character I’m representing on stage, is a part of me. It’s not like I’m an actor, haha. I could not go on stage and take on the role of somebody I’m not. It’s just like this is a part of us which we can display on stage. I obviously don’t act like this when I go to the grocery store or something.

But anyway, its closely related to who I am and how I feel and how I react. It’s like breaking out of the way you behave when you have to meet for example socially at your job. On heavy metal shows you can just switch out of that, no matter if you’re in the band or in the audience, you can just escape from ‘correct behavior’.

But you asked me which of the characteristics I would like to have… That’s very hard to say because I just don’t divide it. I’m kind of the same person on stage.

The mythical theme of werewolves and vampires and all that stuff seems like a very big inspiration for you guys. Can we expect different themes in the future?

Well I can’t tell you. I always tell people that as soon as I feel the need to bring in some different topics, I will do so. I don’t want to limit myself by any kind of limitation. Currently it’s like we feel absolutely fine with what we’re doing, we have never ran short of inspiration so far. If one day I will feel like it, I will maybe change something.

But the point is, the stuff you’re writing about, be it religious topics, be it werewolves or vampire themes, that’s actually the stuff that we’re interested in as private persons. It’s not an artificial contract we have built around the band, we just wrote lyrics about what we read and watched in movies and everything, it just feels very natural to write about these topics. But who knows, maybe one day I will become totally obsessed with astronauts and I will start writing songs about astronauts, I don’t know.

That would probably sound strange to the fans at first.

While you wrote all the songs for the new album, did every song end up on the album or do you have extra tracks like future bonus tracks that are not yet released?

No, we’ve actually put all the songs that we recorded on the album.

Do you have some last words for our readers and your Belgian fans?

Yes. Stay blessed and possessed with heavy metal because we are to!

Also, you’re playing on the Alcatraz Metal Festival in August, can you perhaps also say something for the festival audience?

Well, we have heard a lot about this festival and we’re absolutely looking forward to going there, it should be a very fine festival. We got an early slot as I recently got the read, but we will surely raise a great metal mass there! So be there, join the metal mass and get wild! 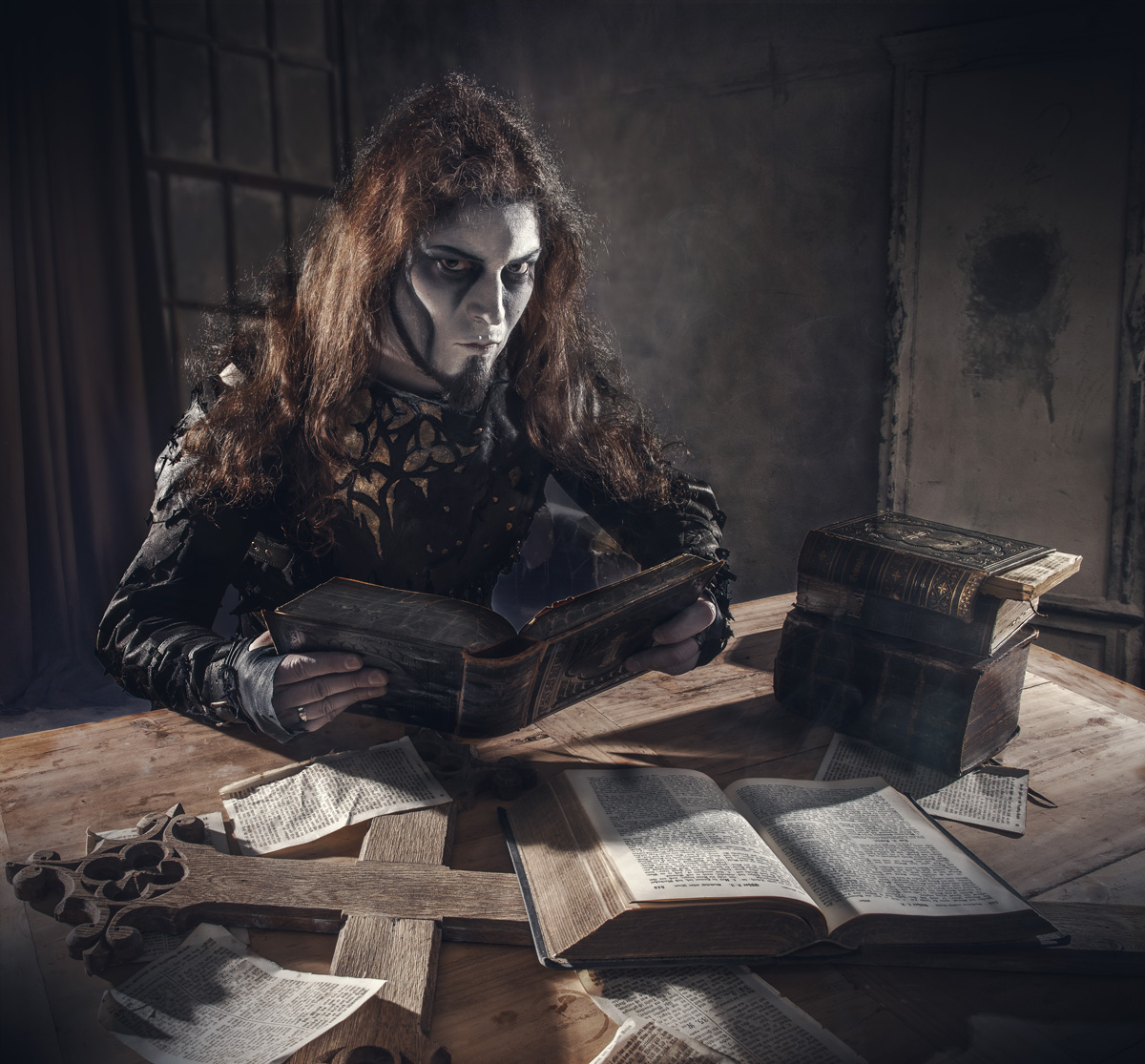